Which is better Red Dot vs Holographic PUBG Mobile

Scopes are something which plays an important role in any battle Royal Game, and if you’re playing PUBG Mobile then choosing the right scope decides you gonna win or lose. There are many scopes in PUBG Mobile we all most know that which scope is good but the confusion comes in Red Dot vs Holographic.

Well, we all know the best scope for a sniper is 8x and the best scope for pro players put on any AR is 6x and 4x is beast if you put it into DP and 3x is overall pest scope. 2x is another good scope if you don’t have other high options but when people see Red Dot and Holographic then they get confused.

I am sure you’re regular player of PUBG Mobile and this is why you wanna know the comparison among both, one thing which I just want to tell you that Red Dot, Holographic is completely different from all other scopes.

And it’s not like that that both scopes are almost the same, not at all if that would be then PUBG Mobile hasn’t had both scopes. This is why I am here to tell you which scope could be a life savior for you and which not, mostly talking about Red Dot vs Holographic Scope. So, stick around with me and at the end of this post you will have your favorite scope.

Before we get into which is best among both, lets, have brief details about both Red Dot and Holographic that what they actually are and what all are some benefits and features of both Scopes. 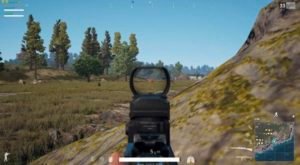 But Red Dot covers less Body area damage percentage, as there is only dot in the scope if you want to shoot enemies far away then it will become difficult to shoot him. However, if you’re pro then you could easily shoot no matter how far the is enemy.

You can even change the color Red Dot to Green dot or even Blue Dot, but I will suggest you to always choose Red Dot as Green could get you to confuse with green Grass and Blue with Sky. 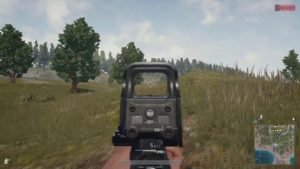 Holographic is another wonderful scope as far as I know, haha, just kidding again. In Holographic you will not get a wide range of view percentages as in Red Dot. That means you won’t able to see the enemies which are on your side, however, the difference is not much.

But Holographic Body Area Damage percentage is high which means even the enemy is far away, you just have to take the enemy spot in your red circle of holographic and they shoot. Bullets will hit the body of the enemy for sure.

Check out: Get PUBG Mobile Royal Pass & UC for Free or Cheap Rate

Another thing which I like about Holographic is that recoil is less than red Dot, Yes, you might think that does they change recoil also, yes, they do change and affect the recoil of the Gun. This is what I am gonna tell you now:

Which is better for you, Holo vs Red Dot

Now, coming to the main question which is better among both Holo or Red Dot, well, if when I personally asked 10 people 7 of them told me that they choose Red Dot if they have options among both. I don’t know why But both are different and both should have different reasons to choose.

Why Should you choose Holographic?

The main reason why you should Choose holographically is only that holo gives you more chances of hitting body shots, and on the other hand Red Dot gives less.

And I’ve seen Holographic reduces Recoil and if you’re using Weapons like AKM, or Barrel then Holo would be an excellent choice on it. AKM is built for Holo only that I believe.

Why should you Choose Red Dot?

Red Dot is best in Scar-L and M416, yes, I could say without any second choice that If you use more these two weapons then Red Dot is for you. And if you think you’re pro, then also Red Dot is suitable for you.

Red Dot gives you wide range of percentages of look that helps in looking for people easily and enemies also.

And one another reason is that Red Dot is quite popular in people that’s why I think you should also choose the Red Dot. However at the end of day, its gameplay that matters not scope.