PUBG Mobile is increasing its popularity each day and there are many active users each day playing this game especially in India this game is really popular. If you’re the one who plays this game daily then you must read this post as there are many new interesting things that you might not know but will help you.

Online Matchmaking System is all automatic process we never think much about it but there are many things that comes up before you get into the match, though these things are not meant for you we need to know about them to get the answer of our main question.

How Does Online MatchMaking Working in PUBG Mobile?

Keeping everything simple and easy to understand PUBG Mobile has many different factors to match every player in the squad as equal to every player in all other 24 squads, for this they have many multiple algorithms.

One of the most important factors that PUBG Mobile keeps in mind before matchmaking with other people is that his league and your league, Make sure that while playing any match like erangel, Sanhok and other classic matches this thing is really important.

But what if you are in Ace and your friend is on Platinum, now, in this case, matchmaking will according to Ace league player only, don’t think if you’re playing with the Platinum player you will also get noobs.

It’s not only that the league matters but other things like KD, Level, Damage on previous matches and all things do matter and here also priority is given to more Point Player.

Check out: AKM vs M762(Beryl): Which Gun is Better in PUBG MOBILE 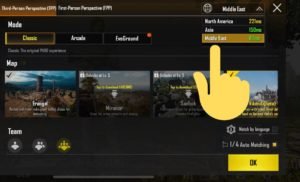 The Another important thing that Game decides while choosing the players to match is a server, If you’re in Asia server than you’ll get genuine players but if you’re on the server like North America or Europe then it will become very easy to play there.

Is emulator a given priority?

This is why I always suggest that if you’re from Emulator then play with Gameloop guys only. Now, let’s come to main question.

Can I play against my friends in Online Matchmaking? Yes, you can play against each other in online matchmaking but there are some things you need to understand first:

If you want to play a Classic match against each other then its kind of impossible to play classic match any, as there are millions of active players and online matchmaking is kind of very rear in Classic match. But if you want to get your friend against you in Classic Match only then you can do it by making sure you both have the same KD, Same Tier, and level or near.

And you hit on start button the same time, there could be chances you will get against each other.

All you need to make sure is that you Hit The Start Button at the same time and you both have near to the same level and tier. And I am sure most times you will get each other against in the match.

More you play the game daily more your tier will increase and then your matchmaking is gonna more difficult this is why you might have noticed that when you on higher leagues you get fewer bots and more pro players.