How to Earn Free Gems in Clash of Clans (Best ways)?

Clash of Clans is the game that completely changed the strategy game genre, Since after its launch this game has gained huge popularity among all Mobile users from all around the world. You could make your own village and train your troops to take into battle. The Online matchmaking system is really great and the game is really awesome.

But I and you are not here to know how cool this game is, are we? So, the main coming to the main point, the most important in-game currency is its Gems. Without Gems, I don’t think you feel like Pro Villager or something in the game.

There are many people asking me to know how they can earn Gems in Clash of Clans game and they all want to know the best way to get Clash of Clans Gems for Free. And the best part is all the ways I am gonna discuss below are completely free, you don’t have to give single Penny to get these gems, but you need to give some time as Investment.

How to Get Free Gems in Clash of Clans

All these methods are proven and tested by myself, so, you can use any of them without having second doubt in your mind but you need to read these carefully. 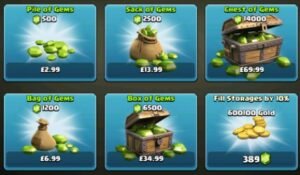 I hope you’re here as you’re kind of dedicate to Clash of Clans and I am sure that you’re quite an active player in the game. You might play Clan Wars you might also have won many, and you get League Medals after winning Clan Wars.

These League medals can give you many things like Increase the builder’s working speed, resource generation, increase speed, and upgrade many new things. But besides having all theses benefits you could have only one that is having Gems in return of them.

Check out: Get PUBG Mobile Royale Pass & UC for Free or Cheap Rate

Without any second doubt, I could say that the first and best working method would bt completing Achievement. It will not only give you experience but also give you Gems and other things in the game. In each Achievement, you will get three tiers to get some free Gems.

You don’t need to focus on these achievements more as you more you play the game more you will automatically complete the achievements. More you get achievements will allow you to get upgrade your bigger and better buildings, you can train more troops and steal more Gold and Elixir Coins.

There are many achievements that will give you some Extra Gems in the game, just got to your profile page and find which achievement would be best for you.

Collect from Gem Mine

I know you might say that it is a really slow process to generate Gems from Gem Mine but its probably the most easiest way to get free Gems. You will get Gem Mine Unlocked at after level 3 and then you can enjoy free Gems.

Just like other resources Gem like do work similar like Coins and Elixers but it gives you very less amount of Gems, however increasing the capacity of Gem mine would give you some more Gems in less time. So, Don’t forget to upgrade the eventually.

Remove your Village outside obstacles

The most common way to get some free Gems in Clash of Clans is by removing obstacles in the game, obstacles are all those who are around your village like trees, rocks and all which has gems inside them.

They have hidden gems inside them but you can never be sure that are will they give you gems or not. Once you get your builder free you can put them on removing those obstacles, it will hardly take 10-15 seconds for each but can give you a really good amount of Gems.

Be Active on Events If you’re a regular player of the game then you might already know that there are regular events in the game. Clash of Clans host some regular events that give you many different rewards and features, so, what you need to do is just be online while these events are going on.

You will get many rewards on the event days so, get maximum out of them in event days. And Make your builders busy these days so you could get most out of your sources. They do give many benefits to earn Gems too.

3 Working VPN Apps that allow to change server in Call of Duty: Mobile

How to get Coins in Ludo King | Can I get Unlimited Coins?