If you are a regular player of Clash of clans then you might also have question that how many clans are there in Clash of Clans, how many daily new are created and many other questions like this.

Do you know what was happened in 2012 in the Mobile gaming industry, That game was launched which completely changed the next few years of teenagers and gamers, the game which was a curse to other mobile games as competition and king of strategy games in the Industry.

That was just any kind of intro I wanted to share!

I’ve done this not only for you but to me also, I have this curiosity that actually how many clans there are really in the game. After 43 hours of research, haha again just kidding, I found actual kind of official answer to this question.

Before we jump straight into the answer we need to have answers to some questions first, and here are these questions.

Answers to these Questions First

How many Players do Clash of Clans Have? (P) 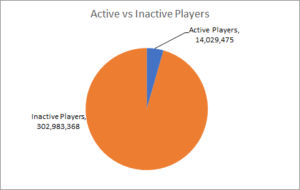 Report of highest active players per month was 29 Million that was in 2015, I know its time of 2020 and now the number of active players is decreased. You should also consider here I am talking about Active players, not total registered players, and 2019 report says there were only 9 Million Active users on end months of 2019.

Yeah, I know the number of users has been decreasing of the game but it happens, before was the time of Subway surfers, then COC and now PUBG Mobile, this sequence continues but we are not here to discuss that, are we?

Check out: How to Earn Free Gems in Clash of Clans Without Paying Single Penny

This is why we will consider that says the game has 9 Million active monthly users this year also. Why are we talking about active users, I’ll tell you later but its really important to know active users to know how many clans are there in Clash of Clans. Now, we have completed a number of Active Monthly player but we need to get those who actively run their clan not them who just shift from one cal to another or even no clan and no clan matches.

We all know that to get to the Crystal League players need actively contribute to clan wars and win them and this is how we can get a number of clans and this is another factor we need to consider.

We don’t know that but the fact says that average 7 or 8 out of 10 players are in crystal league and most of them get that, and as there are many players who just skip the game for some time, this is why we will consider not 4.5 but around 7-8 Million players on crystal League.

Troops and Spells Donation gives direct relation with Clan battles and more this is why is another factor considered here. But getting a record of that is kind of impossible and here we need to make some assumption according to facts.

A Typical Clan match 10 vs 10 have average of 7 Donations with 6 troops and 2 spell donations and if we have active 7 million active clan players that means calculation will go like this:

As we have figures now, let’s disclose the formula here, I found from one site the formula to calculate the number of clans is here:

We got here 334K Active Clans are there in Clash of Clans.

I hope you enjoyed reading the article if yes, then do share it with your friends.