Choosing the best weapon decides your fate in PUBG Mobile, there are many weapons in the game to choose from but selecting the right one is a difficult choice. Many weapons in the game seem like similar and the biggest confusion comes with AKM and M762 which is also known as Beryl. Many people have doubts in both of them whether which one is better.

To be honest, if there would be a one-word answer, for now, I might have told you yet. But the one-word answer is that both Guns are not Similar at all(I know its not one word). But both Guns have many different features and qualities, this is why I am here to tell you which one would be good for you. 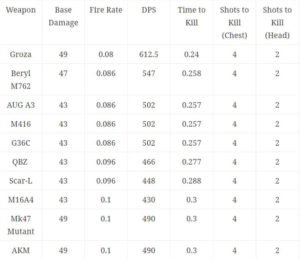 Starting with the most important factor that everyone looks for is Damage. So, AKM vs M762 the AKM has the highest Damage not just more than M762 but also more than any normal Weapon, I am not talking about Drop weapons or Sniper, as its obvious, it doesn’t have more Damage then all these.

If both weapons don’t have any attachment in them then also AKM has slightly higher recoil than the M762 so, AKM is quite difficult to handle the recoil but M762 is easy not as easy as AKM but slightly easy.

However, if you attach different attachments like compensator and also vertical Foregrip then you M762 could be beast for you and you will definitely gonna love this beast. But If you’re good at Handle recoil then you should go with AKM only, however, recoil is not just a factor here, you also need to check other things below. In terms of Attachments again Beryl comes in top, it has 4 attachments these are sight, muzzle, Magazine, and Foregrip.  And AKM has only 3 Sight, Muzzle, and Magazine. Now, the question arises which is good, so more attachment does not mean better or worse but more confusion.

Both are equal here if you choose the right for you like M762 is good if you use 2x or 3x even 4x if you’re good at handling recoil, vertical foregrip is best in this case, extended quickdraw for magazine and compensator for the muzzle.

Same goes with AKM, compensator, Extended quick draw but here in sight you need to use Holographics why to choose that, you can read here.  Don’t use Red Dot or any bigger scopes like 2x, 3x, or 4x, and I can’t say about 6x.

We all know that AKM and M762 are great at single-shot accuracy and they both can also be used as a sniper by setting it to a single shot. Both have same accuracy but AKM has high Damage so, I think AKM wins here.

Talking about Bullets Capacity then both are the same here, without extended they have a capacity of 30 and with the extended mag, they have 40.

I won’t say much about this case as M762 Iron sight is not only worse than AKM but also the worst Iron sight of PUBG Mobile. And on the other hand, AKM iron sight is best among all and Many people chose to use Iron sight only rather than adding some scopes.

Still, Confused which one to choose?

Okay, by the above cases you might have chosen your gun but if you still confused then I would say if you don’t have the scope and want close combat then you should go with AKM, but the scope isn’t a big thing to find this is why the biggest difference I could say is about controlling Recoil. If you’re able to control recoil then AKM would be perfect for you but if you’re new then M762 is a better Option.

And there is another case which no one might have told you before, if you’re good at recoil handling then M762 with 4x is a super beast in the game. Try it once, you will find a significant difference in your gameplay.